The Kochs and Uncle Joe Stalin and the John Birch Society

Mark Ames and Yasha Levine of the redoubtable "eXile" in St. Petersburg, now the equally redoubtable "eXileDonline", since the closure of their print publication by the Russian authorities (what KGB, hunh, what you talkin' about?) have been doing yeoman work for years exposing the intimate interplay between the Brothers Koch and a whole raft of Libertarian and Rightist people, institutions and "grasroots-populist movements.".


A People’s History of Koch Industries: How Stalin Funded the Tea Party Movement
By Yasha Levine

Everyone knows that Tea Party revolutionaries fear and hate socialism about as much as the Antichrist. Which is funny, because the Tea Party movement’s dirty little secret is that it owes its existence to the grandaddy of all Antichrists: the godless empire of the USSR.

What few realize is that the secretive oil billionaires of the Koch family, the main supporters of the right-wing groups that orchestrated the Tea Party movement, would not have the means to bankroll their favorite causes had it not been for the pile of money the family made working for the Bolsheviks in the late 1920s and early 1930s, building refineries, training Communist engineers and laying down the foundation of Soviet oil infrastructure.

I'll only excerpt that much from the article, but Oh My, isn't it already so very special. You see the Kochs, whose animosity to "socialism" is only matched by their animosity to the Government of the United States of America (not yet "Inc" or "LLP"), got the initial kernels of their bazillions from their father's long and strong associations with The Devil Himself, Comrade Monstrosity, Uncle Joe Stalin and that Pit of Satan, the Soviet Union.

GrandPappa Frederick C Koch, you see, was frozen out of the domestic oil production industry by the cartel-like behavior of the already-ins. It is the way the Big Boys play in this country, no doubt about that. So, rather than put up with the foul interference of American oil giants in GrandPappa Koch's fortune seeking, he hied himself to Stalin's Soviet Union where he made A Deal With the Devil to design and build up to fifteen modern oil cracking facilities for the Soviet, in exchange for a hefty bundle of cash money.

Sure enough,  before the outbreak of hostilities with the German Reich, Uncle Joe got the beginnings of a modern oil industry through the convenient agency of Koch Industries, and GrandPappa Koch got... very rich. Ultimately rich enough to start throwing his money around back home in the USofA by creating some of the vast Right Wing Conspiratorial infrastructure starting with the John Birch Society, of which he was a Founder.

The John Birch Society, they tell me, is still around, but only those of a certain age  -- like me -- remember its constant ranting and raving about "impurifying our precious bodily fluids," which was not actually one of their patented talking points, it was a line from a movie, Dr. Strangelove, spoken by General Jack D. Ripper, and written to mock the ravings of the John Birch Society. People who are actually old enough to remember the Assassination of President Kennedy that dark day in November of 1963 remember that the John Birch Society was leafleting  Dallas a couple of days before the arrival of the President with the following Wanted poster: 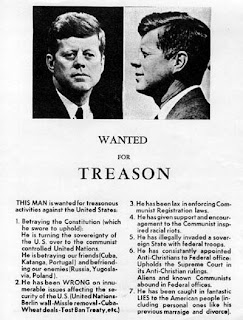 And on the day of Kennedy's visit to Dallas, the John Birch Society -- founded by Frederick C. Koch -- ran the following full page ad in the Dallas Morning News "Welcoming" the President on November 22, 1963: 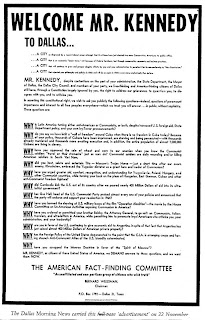 As some of us who are old enough well remember, President Kennedy didn't survive the day. It was thought at the time that Birchers might have had something to do with riling up so much animosity toward President Kennedy that it triggered his assassin to "go for it." No evidence that I know of directly connects the named assassin with the John Birch Society, but then, who... knows? Whoever it is ain't sayin', and is probably dead anyway.

Noted in passing is the following Bircher rant by by none other than Bircher Founder Fred Koch dated February 15, 1964 in the Palm Beach Post. Note, please, the headline and the spittle-flecked fury at a journalist who raised some questions and issues:

A short time ago an advertisement was placed in many metropolitan papers by the John Birch Society. This advertisement pointed out that Lee Harvey Oswald, the murderer of President Kennedy, was a self-admitted Communist, and that Communists always act under orders. The Communist Party is a highly disciplined, semi-military organization, so without doubt, Oswald was working under orders from higher officials.

I was one of the five men who signed this advertisement, and as such, I was singled out for a smear job by the ultra-liberal columnist, Drew Pearson.

Running true to form, Mister Pearson in his column attacked me with half-truths and innuendos. The truth of the matter is this: in 1929, '30, and '31, a firm of consulting engineers of which I was part owner, called the Winkler-Koch Engineering Company, built 15 oil cracking plants in the Soviet Union during the first Five Year Plan. I personally went to Russia in the fall of 1930 and spent several months there making the test runs on the first of these plants to be completed.

At that time, the Ford Motor Company, International Harvester and many of the largest firms in the United States had contracts for the erection of plants in the Soviet Union.

I was naive enough  to think in that far away day that I could help the Russian people by what I was doing.

What I saw in Russia convinced me of the utterly evil nature of  communism. The Russian people were enduring unspeakable agony in torture, hunger, misery and terror, as they were bent to the wills of their cruel masters in the Kremlin.

What I saw there convinced me that communism was the most evil force the world has ever seen, and I must do everything in my power to fight it, which I have done since that time. Since these contracts were finished in 1931, no further business contacts have been had with the Soviet Union.

I would like to comment further on Mister Pearson's smear job. In my little booklet, "A Businessman Looks at Communism," of which over two and one half million have been printed and circulated in one form or another, I said: "If many of the opinions of the Warren Court had been written in the Kremlin, they could not have served the Communists better."

I also stated that I did not know how far the labor unions in the United States had been infiltrated by Communists, but some of them very far indeed judging by the hatred and venom that was spewed out in many labor papers.

I also stated that some of the Protestant churches in the United States had been infiltrated, that ministers do not become Communists, but that Communists become ministers.

If anyone is desirous of getting the truth of what I said in my little booklet, I will be glad to send him a copy if he will write me at the address below:

So far, I have not been able to find the Drew Pearson column Koch is ranting about, but isn't it interesting that Koch is claiming that he has been subject to a "smear job" by Pearson without mentioning anything in Pearson's column that constitutes a "smear" even in his fevered imagination. And isn't it interesting that the exact terminology is being used today by Libertarians complaining about Ames and Levines article in The Nation that mentions John Tyner? Interesting indeed.

At any rate, there's plenty more.

What of Fred Koch's trip from Wichita to the Soviet Union in 1956 mentioned in the Levine article above? What was that all about, and why did he become a raving anti-Communist after returning from that trip? The answers, I'm sure, are interesting as well.