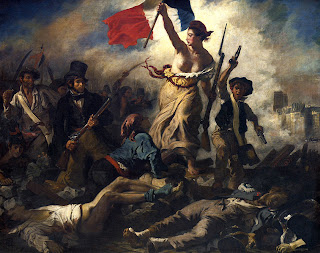 The Koch Koncept of "Liberty" is essential for understanding their -- and their "tribe's"* -- Vision of the Future, and where you and I and everyone else either do or don't fit in it.

[*In other places I have vigorously disputed Libertarian's use of the terms "tribal" and "tribes" and "tribalist" as a lazy slur against those with whom they disagree or whom they wish to accuse of mindlessness or mindless loyalty. Libertarian re-definition of terms to suit their agendas is routine, though. For them, a word means just what they choose it to mean, neither more nor less. And in this instance, I used "tribe" in a way a Libertarian would, in other words, to indicate mindless group loyalty. "The question is," said Humpty Dumpty, "which is to be master, that's all." -- Through the Looking Glass, Lewis Carroll, 1871]

As we saw in the essay on what the Kochtopus wants, in giving a speech in 1997, Charles Koch seemed to misunderstand the nature of the "liberty" of 17th Century English rebels and the "Liberty" of the French Revolution, and very strangely in his talk, he elided out the the intervening American Revolution and its concept of "liberty." In his view, derived he said from Polanyi, the English people developed and lived in "the doctrine of liberty," whereas the French Revolutionaries, not understanding the "doctrine", moved the country away from it.

If the Kochs are asserting that the 17th Century English people's understanding and application of "liberty" is an ideal to be sought, then they're not only reactionary and deep in error, but they are well on their way to rejecting the Enlightenment. If, on the other hand, they reject the French Revolutionary call for Liberté, égalité, fraternité because it's not the "English" notion of "liberty", then they are simply being xenophobic.

But there's not enough information in that speech to draw any conclusions. Since Charles Koch mentioned that his concept of "liberty" as "understood" by the English people is derived from Polanyi's understanding of the 17th Century English "revolution", let's start there.

Unfortunately, I've been unable to track down Polanyi's references to the English "Revolution" vis a vis the English people's understanding of "liberty", but any fair consideration of the history of the period would lead one to realize that the ongoing Civil Wars in Britain were a struggle between power interests for supremacy. Ultimately a kind of stability was found when the Parliamentary aristocracy deposed James II and invited his daughter Mary and her husband, William, Stadtholder of the Netherlands, to ascend the English throne as what amounted to constitutional monarchs. The Crown was preserved and was made generally subservient to Parliament -- which was at that time an entirely aristocratic body, as it had been throughout its entire history. The English People had nothing to do with it. They, bluntly, were irrelevant. And don't even get started on Irish "liberty".

Let's try to define our terms. Liberty and Freedom are often considered synonymous, but they have somewhat different foundations. We can express them this way: "Liberty to do, to have, to be..." vs "Freedom from..." One can have "freedom" without "liberty" and "liberty" without "freedom." There are some Libertarians, for example, who will argue that "individual freedom" (or, confusing matters, "liberty") was greater under the Pinochet dictatorship in Chile than it was under Allende or under any post-Pinochet regime. They come to this pretzel conclusion through the Humpty Dumpty Process referred to above, by asserting that Freedom is a matter of economic autonomy, not political, social or legal "rights." As is the case with modern China, political rights and individual civil liberties may be suppressed while economic freedom is enhanced. And one can thereby claim that one is "free-er" under a dictatorship than one would be under a democracy. Just so, Libertarians are wont to argue that "liberty" -- or is it "freedom?" -- was greater under the Cromwellian dictatorship-"republic" than under the Crown, either before or after the Cromwellian interregnum. Whose "freedom" or "liberty?" Not Catholics. Certainly not Royalists. Never for the peasantry.

No, it was/is conceptually freedom and liberty for some. And then only under some circumstances, within very narrow perimeters, under the watchful gaze of... Authority.

Very often, the conception of "liberty" is caught up in considerations of who gets to lord it over whom and under what circumstances. "I demand the liberty to impose my authority on you." This demand is the basis for contracts in the Libertarian conception, and enforcement of contracts, as we know, is the principle function of government in Libertaria.

In 17th Century England the cry of "Liberty!" was not heard. What was heard was endless denunciation of the Crown, the Church of England, Catholics and Popery, foreigners, and the Arrogance of Power by the Unworthy. The Civil Wars were a matter of determining who would exercise Power and Authority, under what circumstances and in what manner, not "liberation" in any but the most abstract sense, and then only for a few.

American Revolutionaries of the 18th Century were well aware of the English Civil Wars -- which of course affected the British American Colonial enterprise fundamentally. And they realized that for all their supposed high-mindedness, the English rebels were not that much different than the Royalists they opposed, and their "Revolution" -- bluntly -- didn't work. To the extent they considered why and what was needed for the establishment and perpetuation of true "liberty," they saw that the English model was riven with factionalism, deeply cynical, and was in essence no less oppressive and authoritarian than the Royalists. Following the path of the English rebels would lead nowhere but back where you started from. It was a very bloody and circular journey our American Founders wanted very much not to repeat.

Well, you get the picture. From what I can tell Polanyi -- and after him, Charles Koch -- was not so much concerned with English 17th Century "liberty" in the abstract or in general practice. In other words, the "doctrine of liberty" asserted by Charles Koch as the stew within which the English simmered (in a manner of speaking) refers only to a select and highly specialized segment of the English people, and it is their, "liberty" -- as opposed to the misery and oppression of the majority -- that stands as his ideal.

Keep that in mind. It is a select and specialized segment of the population whose "liberty" is important in the past -- as it will be in the Future. Whether that was Polanyi's intent, I can't say. But that's been the upshot of the Kochevik and Libertarian adoption of his social and scientific theories.

"Liberty for Some." Not necessarily for you  and probably not at all for dissenters and heretics and critical observers.

And that is the key to understanding the Kochevik Vision of "liberty," for in essence, it is no different than that of any authoritarian believer, and many a totalitarian butcher. "Liberty" is one tool -- or perhaps weapon -- of Rule.

And "Liberty for Some" was practically the anthem of the English Civil Wars of the 17th Century. The English people as a whole never experienced "liberty" throughout the whole era, and they wouldn't experience anything like the "liberty" that was at least intermittently available to the masses on some foreign shores until well into the 19th Century. To a significant degree, the British are still bound by class and social impediments and strictures, and law is in many ways frighteningly authoritarian and draconian. This is or ever was an ideal of "liberty?" I think not.

So what is this "liberty" of which the Kocheviks speak? What do they mean? They tend to slither away or obfuscate when one tries to pin them down on what they mean by "liberty." From the internal evidence, however, it would appear that the "liberty" they demand is essentially freedom from the imposition of any other interest on their own. The freedom from, for example, public accountability in any political sense. The freedom from social or governmental regulation or requirements. The freedom from "antithetical thinking."

Ultimately it is the "liberty" of a tyrant. It is "liberty" for one's own self and those with whom one is aligned. Period. Full stop.

Americans throughout their history have rightly called this Tyranny and have, for the most part, actively opposed it.

And Uncle Joe may well have had more influence on the Kochs than they can admit.