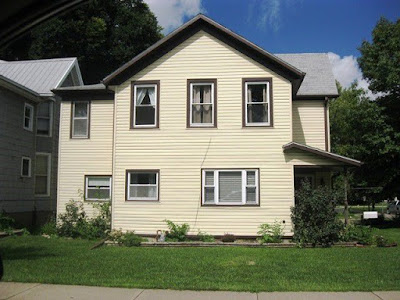 This was my father's house in Iowa. It had been his father's, and for years in the 20s, 30s, and 40s it was used as a family "spare" house. Many members of my father's large family lived here for varying lengths of time until the late 40s when my father and his youngest sister movedin permanently.

The small window on the first floor is where the front door to the house and then to the upstairs apartment was. I'm not entirely sure why it was closed off. Now the main entrance to the house is on the side under the porch roof, where the downstairs apartment entrance was back in the day, but it makes getting to the stairs awkward as hell, as they are still where they were when my father lived there. 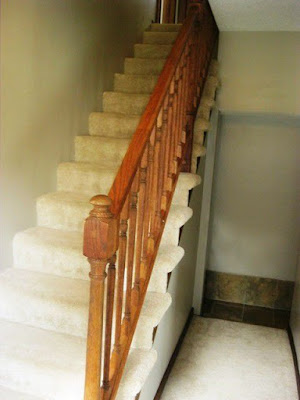 It was a very old house, or at least parts of it were. It started as a two room single story house perhaps as early as the 1840s. It was gradually added to in the 19th century, gaining a number of wings and a second story. Later, long after my father died and the house was sold in 1969, an extension was added  to the back of the kitchen, and even a two car garage was built beyond that. It appears to be quite a large house now, but I know it is not.

I lived there from the time I was born until my parents' divorce, essentially only 9 months, though I returned to Iowa in 1961 and 62 for a couple of months in the summer each year. The first summer I stayed in the upstairs apartment that had recently been vacated by the death of my father's youngest sister who had lived there for decades. At the time, the house was divided into two apartments. I don't know when that happened, but it had to have been no later than about 1930, as I've found many records showing various members of my father's family living in the separate units upstairs and downstairs.

The second summer, I stayed at a hotel down the street because my father had rented out the upstairs apartment.

The house looks large, but it's not. The rooms are tiny. Unfortunately, the interior pictures in the listing are very poor, and it is difficult to gain any sense of orientation and size of the rooms. When I first saw them, I couldn't figure out where in the house most of the pictures were taken. After studying them a little while, however, some of the pictures of the interior began to make sense.

For example: this is a picture of what had been my sister's downstairs bedroom when I was and infant and was transformed into a cramped living room when I visited as a pre-teen. 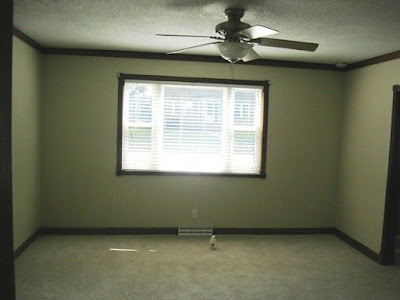 The room is about 10' X 11' in size. The three panel window was added by my father to please my mother. It's somewhat similar to the front window of the house where my mother grew up in California. 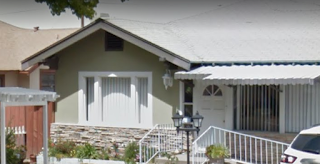 The doorway on the right leads to the stair hall, but it was been closed off when the house was split into two. Apparently it was reopened when the house was renovated and turned back into a single family residence several years after my father died. 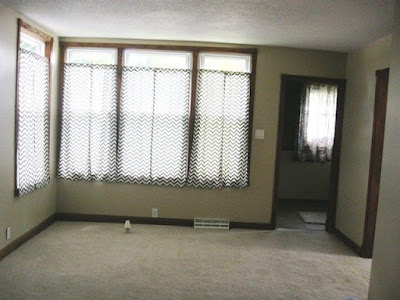 The room is about 10' X 12' or a little smaller. The windows were added by my father to please my mother. The first time she saw this house, she complained that it was dark and musty. There was so little light and air that she said she was depressed and she wouldn't live there. Not only that, the rooms were so small and so badly arranged, it was a nightmare just to get around. For example, the door to the right of the windows leads to a small entrance hall, and the door to the right of that leads to the room that had been a living room or a bedroom.

This is a similar view taken by my sister shortly before my birth. 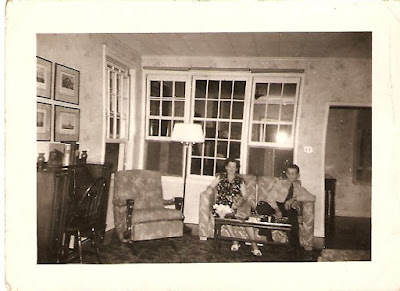 Parental units having a gimlet before dinner? Who knows?

This is a downstairs bedroom. It's about 8' X  10'. It was my parents' room when I was an infant, my father's alone after they divorced. Behind the camera is a bathroom. 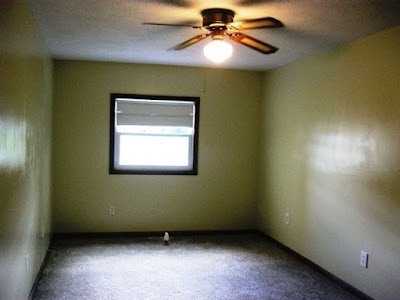 There may be another bedroom beyond the bathroom. I have vague memories of another room there, entered from the kitchen(?) that was used for storage. And then when I went back to the house after my father died, I seem to recall that there was a bed in there together with other bedroom furnishings, and I thought my father had been sleepng in there during his final illness. But my memories of it are not clear.

This may be a picture of that room: 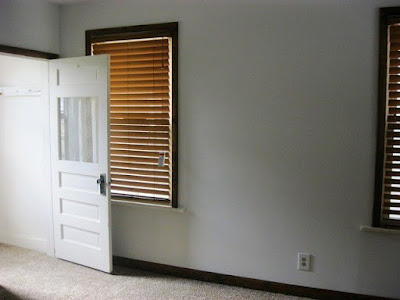 It may also be a room in another house altogether.

This is the west side of the house 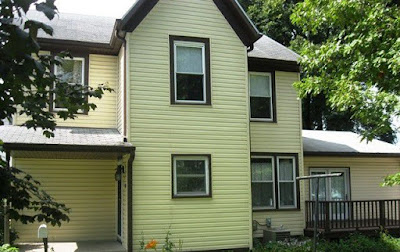 The upper window in the projecting bay was originally one of those Gothic windows like you see in the well-known Grant Wood painting of an Iowa couple. 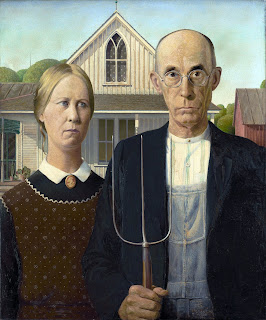 You wouldn't know it from the outside of the house, of course, and as far as I can tell from the pictures in the listing, you can't see the Gothic arch from the inside of the house anymore either, but when I stayed in the upstairs apartment in the early 60s, indeed, the interior window frame was still in place, and its resemblance to the window in Grant Wood's painting was plain to see. The woman in the painting rather resembles my Aunt Alice too, but that's another story for another time.

I saw the painting at the Art Institute in Chicago that summer, and I was quite taken with Wood's technique. I remember being surprised at how large the painting was, as I had only seen illustrations in books previously, and I assumed it was fairly small. I mentioned to my father that the window was similar to the one upstairs in his own house, and he said that the house -- or that part of the house -- was probably built at about the same time, which I would much later learn was the 1880s.

An this is the north side as it is now 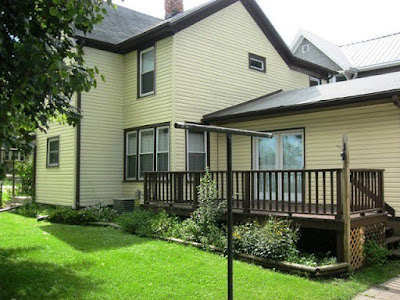 The extension on the back of the house is much larger now than it was when my father lived there. The kitchen and a breakfast room area had been added to the first floor of the house -- I'd guess in the 1930s -- but it only extended as far as the double doors onto the deck in the picture above. There were no double doors or deck at that time; there was only a window on that side and a back door at the rear of the house onto a utility porch with steps out to the back yard.

There's now a double garage beyond the rear extension. There was no garage when my father lived there. He parked on the street. 

The house is listed for sale at a discount price. Not sure why the price is so low except that in this neighborhood, many houses sell for much less. This part of Iowa is not very prosperous, and nearly all the houses on this street -- houses which had once belonged to my grandfather -- are old and dilapidated. This house is actually in better shape than many of the others nearby, but the last time I saw it in person in the early 80s, it was a wreck, painted dark brown and very broody looking. Its current yellow-ness is cheery by comparison.

Again, this is a memory exercise. Finding other houses I've lived in now listed for sale is something of a quest because I've got to remember addresses as well. This one was relatively easy. Others will prove more of a challenge.

Email ThisBlogThis!Share to TwitterShare to FacebookShare to Pinterest
Labels: houses, memories, Reminiscence, where and when