Katsura Rikyu (Katsura Detached Palace,  Katsura Imperial Villa) is one of several historic properties  in Kyoto overseen by the Imperial Household Agency. As the former capital of Japan and a strong spiritual center today, Kyoto boasts many historic and important cultural sites. Katsura Rikyu is considered the purest and most expressive example of Japanese "traditional" architecture and an almost perfect example of Zen and Ma in the material world.

Katsura Rikyu was built and expanded over a number of decades during the 1600s by members of the Imperial family -- not the Emperor -- as a retreat and part-time home for its members. It is a complex of buildings situated in a park along the Katsura River several miles beyond the historic center of Kyoto and the historic Imperial Palace. When the capital was transferred to Tokyo during the Meiji Restoration of the 1860s, the Kyoto palaces and temples remained behind and the spiritual and cultural life of Japan stayed rooted in Kyoto as it had been for centuries. Indeed, for the recent enthronement of Emperor Naruhito, the thrones of the Emperor and Empress, kept at the Imperial Palace in Kyoto, were carefully dismantled, transported to Tokyo and re-erected at the Imperial Palace in Tokyo for the ceremony. And then they were taken back to Kyoto.

It's worth noting that the Emperor and Imperial family had little public profile and no power in the 1600s when Japan was ruled and controlled by Shoguns and Daimyos. At best, the Emperor was a figurehead. Typically, he was captive to Shoguns.

That's a context that often is not clarified in the sometimes rapturous consideration of the Katsura Imperial Villa as a shining ideal of "traditional" Japanese design and architecture. The Emperor was rarely put on display, and the members of his extended family were, to be blunt about it, "nobodies."

Luckily for the Imperial princes who had Katsura Rikyu built, they married money and so were able to carry out their ambitious though severely ascetic plans.

The result has been preserved nearly intact for us to admire to this day. The Imperial Household Agency -- essentially the Emperor's management organization -- conveniently makes it available for public tours from time to time, along with the other Imperial properties in Kyoto as well as the current Imperial Palace in Tokyo.

Their website hosts some very nice videos of the Imperial properties in Kyoto, and I urge readers to vicariously visit them in order to compare and contrast Katsura Rikyu with the other Imperial palaces from approximately the same time.

I've said that Katsura Rikyu is all but unique. There's nothing else quite like it in Japan or anywhere else, though it was certainly influential in its own time as it still is.

The other Imperial palaces in Kyoto seem excessive and over-done compared to it. Yet in some ways, the others are just as "empty." They are presented with no more furnishings than Katsura Rikyu. The construction module is nearly the same, floor plans are not dissimilar, the stark black and white exteriors evoke one another though they are not the same, and even the gardens and tea houses are similar between the Katsura Rikyu and the other Imperial palaces in Kyoto.

In other words, there is a family resemblance, but Katsura Rikyu is on another plane.

Zen was a practice deeply ingrained in the samurai warrior culture of the era. It was a form of mind discipline that helped enable and maintain the warrior's supremacy in battle and in life. The Shogunate was an outgrowth of Japan's feudal warrior culture. The Emperor and all things Imperial were outside it, almost irrelevant to the Shoguns and Daimyos. And yet at Katsura Rikyu, some members of the Imperial family took on the task of showing what Zen would look like in the material world. Not at all like the overdecorated and heavy-roofed, vermilion, gold and gem encrusted palaces of the Emperors, Shoguns and Daimyos nor like their temples but rather it evokes the lean, spare, stark, and "empty" houses and gardens of the samurai and the primitive accommodations of the Japanese peasant.

Of course the scale of Katsura Rikyu is quite different, and the materials, fit and finish are on another level altogether, and yet... that can be considered Zen as much as anything else about the place.

As a means of "showing" Zen, Katsura Rikyu puts the many monasteries and Zen temples around Japan to shame. By reducing decorative elements almost exclusively to nature and the moon (very important in Buddhist iconography) and emptying the residence (body and mind) of everything that isn't the "Now", Katsura Rikyu becomes the embodiment of Zen, even more so than its models in samurai and peasant houses and gardens.

But in the end, it's an Imperial palace, quite beyond the wherewithal of any ordinary person or family to undertake and maintain. When it came under Imperial Household Agency control and authority it was partly because no one else could afford to maintain it. It has to be renovated and restored periodically -- at breathtaking expense -- and the gardens, gates and teahouses require constant maintenance in order to maintain an appearance of Zen perfection.

It takes an army of servants even now to keep the place in order and looking its best.

As an embodiment of Zen, Katsura Rikyu, of course, is not Zen. The appeal to the senses is undeniable, but it's an illusion. Everything you see, feel and experience there evokes a sensation which is not Zen, and in the end, as captivating as the great emptiness and stark beauty of the site may be, it is neither Zen nor enlightenment.

The perfection of Katsura Rikyu may indeed prevent enlightenment.

That preventional problem has been noted of much of Zen practice. Monasteries, teachers, roshi, the whole panoply of Zen practice has long been criticized as the perfect means to ensure that practitioners, sensei and roshi never achieve satori or enlightenment but remain forever trapped on "the path."

When I initially engaged my interest in Zen in  the early-mid '60s in California, I corresponded with someone at the San Francisco Zen Center. I believe he was from Japan, but as I never met him, I cannot say. I informed him that I could not come to San Francisco at the time, and so I could not be part of the community (sangha) in person. I was told there was no need. One did not have to be there in person to participate, but also one did not have to participate in the community to practice Zazen. Not everyone who could did, and not everyone who did should.

Zazen was a practice that existed independently of Zen sites and communities.

And I've wondered if Katsura Rikyu was an intentional alternative to "monastery/temple Zen;" we might call it "Palace Zen." In many ways, it seems to represent the interest of an individual, rather than a community, in the practice of zazen. A prince could sit himself down essentially anywhere at the site and practice zazen, with or without company, and it seemed to me the whole place might have been intended for just that purpose and no other.

The thought made me smile. 😊

And this gets us into the influence of Zen and especially Katsura Rikyu has had on modern thinking about architecture, dwellings, and so forth.

I mentioned that initially my exploration of Japanese design and architecture which led to my interest in Zen was driven by the fact that the house I was living in at the time featured elements of Japanese design in the roofline and decorative appliques on the facade. The living room also featured a 16' wall of glass with a sliding door, and there were various Japanese or Frank Lloyd Wright inspired touches here and there in the interior. This was fairly radical for the time.

This is a Google street view of the house taken in 2011. You can't see much of the "Japanese" look of the house, except for the roofline over the garage. The rest has either been painted out or replaced as in the case of the garage door which originally had an applied "shoji" design. 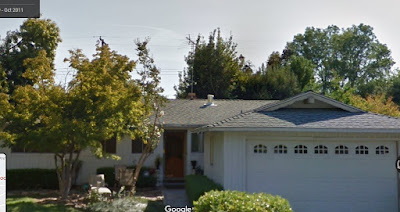 We moved in in 1962, but the house was built in 1957, only two years after the publication of "The Japanese House and Garden", and from the outset, I was quite astonished by its Japanese-ish features. The builder was previously known for building thousands of nondescript post-war houses in Sacramento and the Bay Area with no style at all. Then suddenly in 1957, he started offering new houses and floor plans, with a choice of three stylish exteriors -- Farmhouse, Contemporary, and Japanese -- that sold quickly and at a premium price, although the Japanese-ish model was not the favorite. Nevertheless, it was influential, and you started seeing Japanese-ish features on many houses built by other builders until the late '60s-early '70s.

I was taken enough with the minimal Japanese-ish features of our house to eventually add elements like verandas, attempts at extended eaves, and a small Japanese-ish garden behind a Japanese-ish reed and bamboo screen-fence. The front garden was still there in 2011, pretty much as I planted it, but the screen-fence is long gone.

None of it was Zen, of course, but it was pleasing.

The interior of the house was a mish-mash of "builder styles" that was pretty chaotic but late in my residency there, I attempted a minimalist-ish re-design that got rid of most of the accumulations of the decades and limited the chaos. I see it in my mind's eye better than I remember it, though!

My practice of zazen started while I lived there, and it continued for a number of years after I moved out, but by 1973 or 74, I'd pretty much stopped the practice, though probably I should have continued. Or maybe not.

My carved wood image of the Kamakura Daibutsu is painted gold so it will glow in the light from Kanthaka. Hotei smiles. A laughing sage stands under cherry blossoms made of silk. The scent of nag champa wafts in the perpetual breeze. Reminders one and all.