Pushing Them Into Poverty 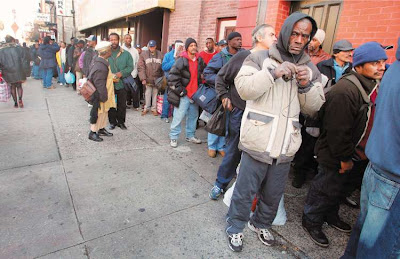 The World Bank declares that 50 million people world wide are being forced by the global depression into extreme poverty, and they call on rich countries to stop dallying and get with the program of assisting the worst off in the world.

There is no doubt that globally the depression has hit poorest the hardest and the consequences are barely recognized in this country.

The poorest Americans are hit hardest at home as well, and one thing that keeps getting ignored (among so many ignored items!) in the United States is that millions and millions of people are being pushed into -- or are being pushed back into -- poverty.

Current statistics show that around 6.5 million Americans are collecting unemployment insurance payments. A recipient is lucky to receive 1/2 their former pay while on unemployment, and in many cases they receive much less.

About half of those who are out of work don't receive any unemployment insurance payments at all, so the real number of unemployed is closer to 13 million. There are also an untold number of Americans who aren't employed but who do not show up in the statistics because they've given up looking for work and are now considered "out of the workforce." They may want to work, if there were jobs available, but there aren't any, at least not for them.

Added to those who are completely out of work are many millions -- at any given time between 10 and 15 million -- who can only find part time work and who are considered "underemployed."

Bob Herbert, in today's New York Times, picks up on a theme I've been hammering for quite a while: with these massive levels of unemployment and underemployment, really not seen in this country since the Great Depression, there are surprisingly no significant jobs programs to put people back to work quickly, and there are many in the field who are saying that the contraction in employment is essentially permanent, that many of the jobs people no longer have are not coming back, and further, many of those who are now unemployed cannot expect to return to the workforce. Ever.

Yet the highrollers continue raking in the Big Money, now out of the treasury coffers.

The folks who led the nation to this financial abyss are the ones being made whole on the taxpayers’ dime. We can look after them, all right. But we can’t seem to get credit flowing in any normal way again; we can’t stanch the terrible flow of home foreclosures; and we’re not doing nearly enough to address the most critical need of all: putting people back to work.

While Wall Street is breaking out the Champagne yet again, the rest of the economy is beyond terrible, and will be for the foreseeable future.

Many of these people who are being "shed" from the workforce (still around 600,000 a month) will never have a job again. Some of them became gainfully employed as part of the vaunted Clinton Welfare Reform -- when President Clinton demanded of employers that they find work for the many millions who would no longer be eligible for welfare. Employers stepped up to the plate, and jobs were found. But many of those jobs are disappearing and many of those who were employed as part of the Welfare To Work Program are now unemployed, and there are no other jobs for them, nor is there any welfare to take up the slack.

Homelessness is skyrocketing, and charitable giving is declining. The squeeze on the lower and middle classes is getting tighter and tighter, while the upper 1% continues to swim in champagne.

At some point, this situation will not be sustainable. Those on the lower end who have been "shed" by the depression will have little choice but to fight back if they intend to survive. And we can be certain that our Government, which has decided its survival is in serving the rich and the powerful almost exclusively, will find a means and a method to suppress any rising of the modern day sans coulottes crying out for a scrap of bread.

The surprising thing is that with so many currently unemployed, and with more and more added to the unemployment statistics every month, many of whom will never work again, there has been so little grumbling and so muted a rage among the masses up to this point.