They still won't call it Torture 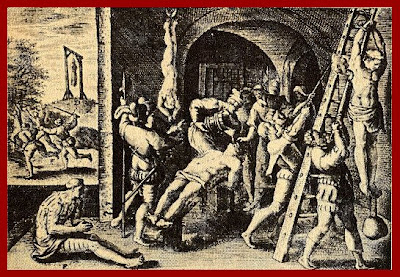 The "Torture Memos" were released last Thursday, April 16 -- some wags said as a distraction from the Teabaggery -- and  brilliant minds all over the blogosphere went to work. The ACLU, of course, got its props for forcing the release of these memos that describe in excruciating, ugly detail just what is permitted to be done to American captives in the Great and Global War On Terror, and the efficacious results of said practices. Very Medieval.

All the witches confessed, don't forget.

The picture shows, among other common practices, what's called the strappado. As viewers of "24" will know, it is how you hold terrorists captured on the field of battle, and -- when necessary -- it's what you do to anybody else at all who crosses you or who might have "information" that must be extracted.

It's also called Palestinian Hanging because it is what the Israelis do (or are said to do) to the Arab captives they hold, routinely. It was commonly used at Abu Ghraib and at the other prisons run by Americans in the Great and Global War On Terror, and -- not to play favorites here -- it is a commonly used "technique" by all of our many enemies as well.

It is torture, plain and simple, common as dirt, and quite likely as widespread now as it was at any previous era in history.

Also shown in the picture is the Famous Waterboard. Which -- according to reports -- was used hundreds of times on American captives in the Great and Global War On Terror; it is the same torture for which American service personnel were courtmartialed during the Vietnam War and during the Philippines Insurrection. Japanese prisoners were sentenced to death for doing it to American prisoners of war during WWII.

And yet, still, even now, Our Major Mass Media will not call it -- or anything else done by our various services and their contractors -- torture.

It's the most amazing thing.

This is how the New York Times refers to waterboarding captives hundreds of times:

And this infuriates me. The whole world calls it torture, not just "top Obama administration officials" (like the President himself, e.g.), but the New York Times, in its wisdom, will not call it torture, nor, apparenly, will any other mainstream mass media outlet.

Since the Torture Memos implicate all sorts of people, including an array of Busheviks, sitting judges, CIA operatives, contractors and mercenaries, medical and legal professionals, and on and on, could it be that the NYT's interconnections with all those interests, all of whom might suffer irreparable harm if the Times took to calling these "techniques" what they are -- ie: Torture -- prevents the Times from using the correct term for fear that people they know and people like them might wind up before a tribunal somewhere?

All I know is that the continued refusal of the major mass media in this country to call a thing "torture" -- unless it is being done by our many enemies (under those circumstances, they have no problem using the right terminology) helps keep Americans befuddled and confused and deeply ambivalent about what's been done and what is being done in their names.
Posted by Ché Pasa at 5:47 AM