Back in California: The eMeg Disaster 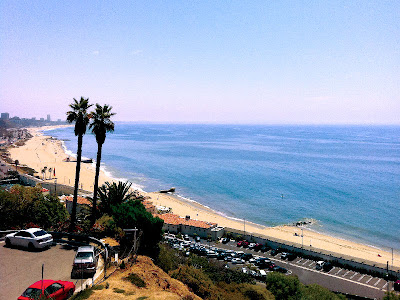 I've actually tried my best to keep this walking-talking miserable excuse for a CEO out of my mind for all the many months she's been spending up a storm (now $125 million or more) to buy the Corner Office in Sacramento. She's faltering in the polls against the surprisingly spry Jerry Brown (what is he, seventy-something? And he sounds and acts a good deal younger than Whitman -- in her 50's.)

But she's got more money than God. Now let's examine where this money comes from and what it is she plans to "do" for California once she's secured possession of the Corner Office.

She is former eBay CEO, one of the many dot.com miracles from times gone by, that opened up a whole new entrepreneurial realm for millions of (mostly) small-time buyers and sellers around the world. eBay is the embodiment of "free" Markets. Except it isn't "free".

Its services are offered for a fee, a tiny one, seemingly, at least back in the old days: a few cents for listing your few paltry, shoddy items, a few more cents for pictures of your sorry stuff, a few more cents (or percent) as eBay's cut if you sold your crap. Maybe 10%, total. Unless you used Pay Pal, which wasn't initially owned by eBay but is now, which was another 3% or so.

All these tiny percentages on millions upon millions of sales added up to a tidy profit, much of which went into eMeg's bulging purse, which was all well and good so long as she herself was out of the picture, and we didn't have to listen to her prate about turning California into eBay-Nation.

She goes on about how eBay provided individuals with "millions of good jobs." Well, that's a matter of opinion. Actually relatively few users make any kind of living from eBay, nor do most users have any intention of doing so. Its primary function is still what it was at the outset: a National, and later International garage/yard/tag sale.

A means to get rid of your excess stuff. There's nothing wrong with the concept. In fact, it's an outstanding notion, one that has been adapted or copied by dozens if not hundreds of other specialized internet marketing operations, though none are as successful as eBay.

But it's not a way to "make a living" for most people -- who have neither the skill nor the inclination to constantly fill and monitor listings and sales online. It's a specialization that some people can handle, but most can't and wouldn't want to.

And yet, it's the model eMeg wants to use to "get Californians working again."

Unemployment is a severe issue in California, to be sure, and the unemployment situation in the Central Valley is dire in many counties. As I was traveling up and down the Valley, to and from New Mexico this most recent trip, I noticed how often the political theme of "getting Californians working again" was bruited about by essentially only Republican candidates for office.

The fact that Republicans use it all the time while Democrats are essentially silent on the topic of unemployment is instructive. I've been pretty shrill myself about the lack of interest Democrats in office have shown over persistent unemployment throughout the nation and particularly in California. It is their albatross, and their continuing languid indifference over unemployment is likely to be their undoing (at least the undoing of their Congressional majority) in the fall.

eMeg is "smart" in that she is keying in to the public's anxiety and outrage over continuing unemployment (Jerry Brown is not oblivious, but he's on another -- Green -- level about it) and offering her version of a solution: "Y'all can sell your stuff on eBay! Yay! Beaucoup bucks! Yay!"

As I traveled north through the Central Valley this past weekend, I passed two huge flea markets where people have been selling their stuff and other people's stuff for years. The flea markets -- which haven't actually proliferated as much as I thought they would given the Endlessness of the Recession and all -- are both places to unload surplus material items and places to socialize on the weekend. That's part of what makes them so popular in good times and bad. The clientèle is largely Hispanic, no suprise. And what they sell is whatever you can think of. Some people "make a living" from it, but comparatively few. That's just how these things work.

I think Californians understand that, though I can't be sure. You never know whether the People will fall for the gambits of the millionaires and billionaires or not. Cf: The Multi-Mega Millionaire Orange Waxy Man who currently occupies the Corner Office. (Actually, they've stopped spraying him down with orange makeup these days, and when he makes personal appearances he looks pallid and almost frail. The steroids did a bang-up job on him, that's for sure.) You'd like to think they won't get fooled again, but...

Anyway, at least eMeg is holding out some hope, wan as it may be, that somehow Californians can go back to work. Of course she wants to get rid of regulations that "stand in the way" of putting people back to work -- like wage and hour laws, health and safety protections for workers, environmental regulations, that sort of thing -- and, like most neo-liberals, wants to create a "level playing field" for workers and their employers. What this means in practice is that she, like most Republicans and many Democrats (apparently including the White House) wants to reduce wages, eliminate worker protections, and limit regulations to "global standards." She wants to compete with China by being like China, in other words.

That's what a "level playing field" means to these people. They don't want to bring China up to American standards (as faulty as they may be), they want to reduce American standards to those of China (which are improving, somewhat erratically.)

So that they can continue to make the Big Bucks while the People, if they're lucky, can barely get by.

And then there was The Maid.

Jeebus, these people and their servants.

An Illegale it would seem, who eMeg had on her household staff for nine years, and when it was revealed that the woman lacked papers, eMeg fired her brown ass. And so she and Gloria Allred are making a stink.

Sigh. Well... In New Mexico, this situation is looked on with bemusement at best. Neighboring Arizona is trying once again to empty itself of Messicans, as it has done over and over again since it was acquired from Mexico as a consequence of that Dirty Little War of 1846. I understand that large swaths of Phoenix and Tucson have been vacated by the Filthy Beaners, many of whom have actually moved to New Mexico where at least they won't be harrassed by the authorities. I've long called for a Day of Absence style resistance in Arizona, for all the Hispanics to simply go on strike for a day or a month or whatever it takes to knock some sense into the addled pates of the Anglos who think they are so damned superior.

Then we'd see a solution to the "servant problem" for damn sure.

But the eMeg Servant Problem is on quite another level. Though she would fortify the Border and deport all the Illegales -- as all Republicans say they would do (but they won't, not really) -- the fact that she would casually hire and keep one of Those People in her own household for many years, and fire her ass when the Truth Be Known, is simply the way things are among that class of Predators. It's how they behave, all the time, about everything. Skirt the law when it suits you, enforce it against the Little People when it is convenient. She doesn't want to get rid of Mexicans -- except when they are inconvenient to her ambitions.

Thinking this through, one realizes that Jerry Brown probably has servants, too, to take care of that mansion up in the Oakland hills where I understand he and his wife (yes, wife!) live. Or used to before he became AG. Or maybe still do. Does anyone know?

At any rate, he married money, and people with money have People to clean up after them. It's just the way it is. And in the West and Southwest, the people who clean up are generally -- though not always -- Hispanics. Many of them are undocumented. Which is convenient, historical, and a political minefield. So I'm sure someone is checking the papers of Jerry Brown's household servants as we speak, and I would assume that some of them over time have lacked the proper papers.

A big to-do will be made of it, and Brown will argue that the issue is bigger than just this or that maid, and we ought to have a conversation, yadda-yadda. And eMeg will flounce around saying, "See! See! He's just as bad! No, he's so much worse! I hate him, I hate him!" Such is the decline of political discourse our fair land.

If eMeg and her evil twin Carly Fiorina are elected in the fall, all bets for a brighter future in California will be off. Putting CEOs in charge of Government may be a plutocrat's wet dream, but it will be a complete disaster for the state and the nation. At this point, the polls don't look promising for the CEOs, but things change. On the other hand, the essentially rear-guard action of people like Brown and Boxer -- to hold on to some shreds of Progressivism in the midst of the plutocratic tidal wave -- is sad to witness.