Random notes that have come up over the last few days that I didn't think warranted a full post at this point.

Despite emphatic predictions of waning business prospects, some of the big Internet companies that the former National Security Agency contractor showed to be closely involved in gathering data on people overseas - such as Google Inc. and Facebook Inc. - say privately that they have felt little if any impact on their businesses.

Insiders at companies that offer remote computing services known as cloud computing, including Amazon and Microsoft Corp, also say they are seeing no fallout.

Meanwhile, smaller U.S. companies offering encryption and related security services are seeing a jump in business overseas, along with an uptick in sales domestically as individuals and companies work harder to protect secrets.


"No fallout?" "Little if any impact?" How ever can it be? We'll see. All I would add at this point it that the NSA's corporate partners have been notorious "untruth" tellers from the day the revelations of massive NSA surveillance broke last June, and I wouldn't take anything they say about anything at face value. They -- like the NSA -- lie. So I question even the statements in this story.


But the  FISA court has issued a ruling (pdf) that says the corporate partners in the telephone metadata collection program that kicked off the NSA Revelations Story of the Summer have never filed an objection of any kind with the Court, let alone utilized the "robust" procedures allowed by the Court to challenge the (evil-)Government.

This is yet another reason not to take any of their protestations of "innocence" at face value. Corporate partners have been active collaborators with the government in the development and implementation of the National and International Surveillance Regime from its inception, and they have done so largely without coercion.

The Syria Thing of course has taken over all media attention (that not devoted to the Colorado Floods and the Navy Yard Shooting) since shortly before Labor Day, and the punditocracy is in full lamentation over it -- because, apparently for now at any rate, they didn't get their war on, and they might not even get a war on with Iran, which is their collective and one desire.  It's really quite disgusting to hear them chatter away and lament the "failure" of Obama to conduct a war of choice on the al-Assad regime of Syria over the use of chemical weapons -- which are banned, except when the United States or Israel decide to use them. Who are these freaks, and why are they allowed to infest my TeeVee:

In The Way Things Used To Be department, I found this little gem (transcription below) that might be illuminating to those who have been keening and rending their garments over the NSA Thing.

I think I've pointed out that we have a fairly large library of mostly old books at home. One of them is The Book of Wonders published in 1919, though most of the material in it dates from well before that. It generally deals with why things are the way they are, scientific discoveries, and wonders of technology of the late 19th and early 20th centuries, the era of unprecedented progress if you will. Luckily Google Books has an edition of it online so I don't have to manually transcribe the following passages regarding the Story in a Telegram: 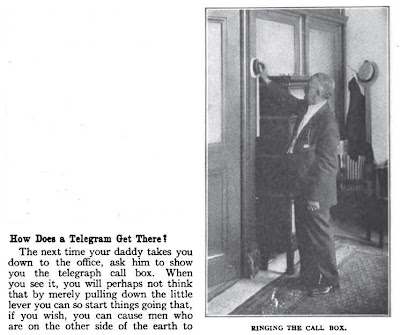 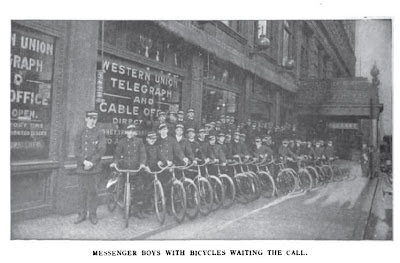 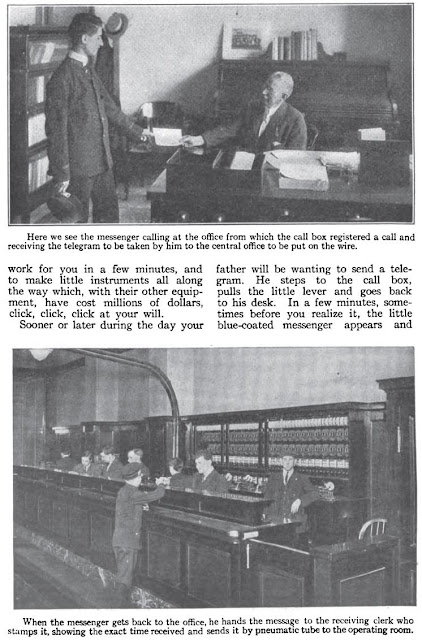 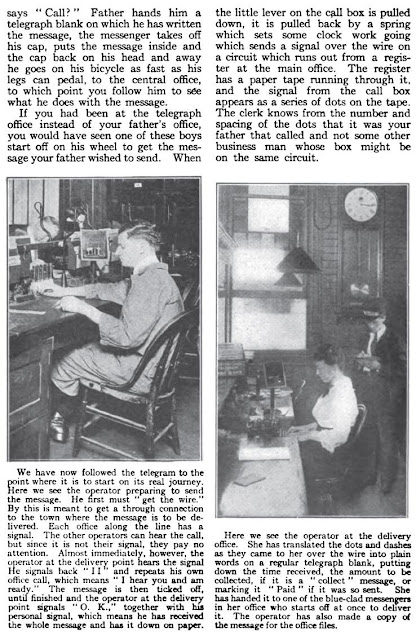 This was all considered quite the amazing and wonderful thing a century ago, and because it was so expensive a service, ordinary people rarely sent telegrams -- that's why receiving one was considered to be so consequential. Most telegraphic communications was between businesses involving matters that required immediate attention. Note, however, that Western Union kept a hard copy of every single telegram sent.

It's hard to believe, but they did. Thus, the Company maintained files of not just metadata, as we would say today, but content as well. Operators at both ends of the telegraph line also had direct and immediate access to the contents of every message they handled. There was no privacy -- nor was there an expectation of privacy -- in this form of communication. And everybody knew it.

So how was this complete absence of privacy handled? In theory, the police could not get access to this information without a warrant, but just as is the case today, I doubt the theory was observed in practice as much as it should have been. The Company and its operators had full access as was necessary and as suited them. They could use these communications for nefarious purposes, though of course they assured their customers that they would never do such a thing, perish the thought as I live and breathe. Customers, wisely, didn't believe them. Consequently, many telegrams were written in a cryptic code, not simply due to the high per-word charges Western Union assessed users, but to keep the contents of telegrams difficult for strangers and spies to understand.Simple.