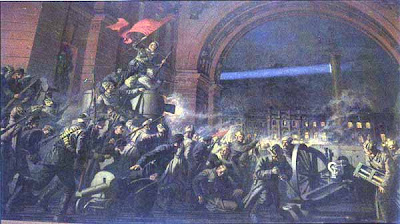 Most everyone calls their own movement against the Powers That Be a "Revolution," when in fact most are revolts over some real or imagined slight. Revolts go on all the time; Revolutions are pretty darned rare, and they typically occur after a successful revolt has made what are at the time thought to be fundamental changes but which turn out to be little more than superficial window dressing.

Thus, for example, the Russian February Revolution in 1917 was -- for all the drama in and outside of Petrograd -- essentially a revolt in that it forced the abdication of the Tsar but kept most of the structure of the Tsarist regime in place, didn't take Russia out of the conflict in Europe, and did nothing at all to improve the lot of the masses.

It initially had some of the style and the energy of a Revolutionary uprising, but in the end, its victors acted to maintain the status quo, with an overlay of bourgeois democracy -- which in turn was so factionalized and fractious that nothing could be done. In July, there was a coup that put an emergency neo-Autocracy in power under the very curious rule of Alexandr Kerensky. It was as if the Tsar was back.

Then in October (November, by the Western calendar) the Bolsheviks rose up in a sudden and swift move -- a coup of their own, if you will -- that took over the government from Kerensky and his ministers and immediately began The Revolution, with the intent of getting Russia out of the War and transforming Russian society top to bottom.

The October Revolution was the beginning of the actual Revolution, and that Revolution didn't end until the Yeltsin faction fired on the Soviet Congress building in Moscow (called the "White House") in 1991, thus consolidating the Yeltsin/Neo-Liberal revolt of two years before when the Soviet Union was dissolved.

The Bolshevik Revolution was in a fight for its life from day one, and there was very little respite from invasion, civil war, famine, and struggle against its constant enemies from the moment of its founding until its final collapse under fire.

There have been other successful revolts that have turned into Revolutions (our own American Revolution included), as well as some misnamed "Revolutions" -- such as the so-called "Glorious Revolution" in Britain in 1688 -- that were essentially nothing more than adjustments among the ruling classes for primacy.

The 1848 Revolution(s) in Europe were widespread revolts that might have led to Revolution, but they failed. None of the endless uprisings in Ireland against British rule were actual Revolutions. The Indian Independence Movement, on the other hand, was as genuine a Revolution as there's ever been, as not only was the British Raj ejected, but Indian society was remade top to bottom. That's what a Revolution does. That's almost its definition.

The current Arab uprisings have been characterized as Revolutions, but the upshot of Victory (when it has come at all) has been a kind of ambiguous bourgeois rule that maintains most of the characteristics of the deposed regime; in other words, who operates the Machine of Rule changes somewhat, but the Machine is the same, and the uses to which it is put -- primarily exploiting and suppressing the masses to the benefit of an elite -- is identical. In other words, the Revolution hasn't actually come at all.

The test for Arab Revolution might be in Libya, where the forty plus year rule of the Gadhafis has been broken. Gadhafi brought a true -- and unique -- Revolution to North Africa all those many years ago. The revolt against it, at least from appearances, has yet to become a Revolution; but if it becomes one, it has all the makings of yet another Neo-Liberal imperialist adventure that forces previously faulty but functioning independent and nationalist countries into the effective rule of a globalist cabal of extractive exploiters. You can call it a Revolution because it does change many aspects of society -- usually for the worse -- but it's more like colonial/imperial imposition from the top than a true Revolution (from below, let's say.)

In the United States, a successful Revolution has been under way since the advent of Ronald Reagan in the White House in 1981. Thirty years later, much of American society has been transformed, the economy is nothing at all like the pre-1981 American economy, and American politics and government have become attenuated simulacra of popular constitutional government, and is now fully captured by a corporatist-imperialist elite. In years gone by, this state of affairs would be called Fascism, but because this Revolution is not -- yet -- totalitarian, in that it doesn't appear to focus on transforming and unifying the masses in service to the state (though appearances can deceive) the transformation that's gone on in the last 30 years has been as thoroughgoing a Revolution as anything that's taken place in this country's history (acknowledging that we have been through several similar corporatist-imperialist periods in the past). It appears to be an "organic evolution" rather than a Revolution in that most change has occurred relatively incrementally (of course there are many exceptions to that rule, such as the lawless imposition of Bushevik rule in 2000), with the clear intent of consolidating the Rightist Revolution in America once the current Boomer generation dies off.

We're seeing many signs of a generational split much deeper than previous ones in that the upcoming generation has been educated with a completely different set of facts and world-view than their parents and grandparents. Younger people not only don't know very much about the past, they don't believe much of what they are told by those who were there. They have no idea what the real motivations of the uprisings in the 1960's were about; they have only the vaguest notions of what the Civil Rights Movement aimed to accomplish -- and they have almost no understanding of what conditions were really like for minorities and women prior to the Civil Rights and Women's Liberation Movements. It's not simply that they didn't experience it themselves, it is that they are not taught.

All the Revolutionary energy in this country is and has long been among the Rightists; not surprisingly, they are successful. What passes for the "Left" seeks to preserve the status quo, and they are failing miserably.

The status quo is changing; the "left" cannot maintain it. Most have no interest in developing an alternative and positive forward vision. Instead they seem satisfied to hold on to whatever tattered remnants of the past as they can, like pitiful old aristos clinging to the few sad remains of the way things used to be in hopes that the Whites will restore the Little Father one day.