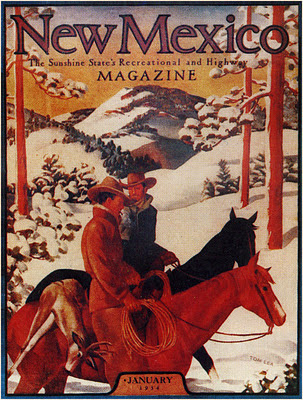 I had planned to be back in California by today, Christmas, but The Snow came and made the trip difficult enough for me to postpone travel at least for a day. But I know it has been worse for some who started out earlier and got stuck on the snowed in highways. Some may still be digging out. Snow this heavy, this early in the season, is pretty rare around here. Though many people were prepared -- as best they could be -- many others were caught by surprise and are doing their best to cope.

Coping with the weather became the primary focus of my stay in New Mexico this time; the frozen pipes, the repeated storms, the snow... It's all been very evocative for me because it reminds me of winters spent in Alaska and Upstate New York, long ago now, when I first got introduced to snow and blizzards and the joys of frigid fingers and toes and nose-and-eartips and all the many delights of the season as a regular thing.

You adapt. Amazingly quickly. It's been kind of like riding a bicycle. Once you know how to deal with Winter, you don't forget. Nevertheless, as a rule, I don't do very well in cold. It's probably genetic.

But while I've been here -- in between making pans and pans of tamales and shoveling snow and dealing with unexpected appearances of ice -- I've been thinking a lot about what I've come to see as the core values, the principles of this Revolution that's continuing all over the world.

They seems like such simple concepts -- but they prove to be so difficult to achieve.

The fact is, the People have been betrayed, and as they wake up to the total wreck their Betters are making of this world, their righteous anger rises higher and higher. Anger may motivate the uprising, but it's not enough by itself.

Dignity has been stripped from many millions over the course of this endless regression (it's gone beyond a recession). And many millions more are slated to lose their Dignity before it's over -- if it is ever over.

Dignity is an essential value of being; it's ingrained in the nature of existence, and yet there are constant assaults on one's dignity from nearly the moment of birth. There are people who seem to feel their own dignity is somehow jeopardized by the dignity of others, and so they seek to strip The Other of dignity so as to (somehow) enhance their own. They conflate having money or power with whether or not one "deserves" being treated with dignity. When the concept of universal dignity fails, it tends to be replaced with predatory instincts, stealing in other words. One takes from others who are "unworthy" of dignity. Yet once predation becomes the core value of a society, it hollows itself out until it collapses from within.

That's been happening to the United States at an accelerating pace lately, but predation has been a core value of many Americans from the beginning of the European conquest and settlement in the Americas. It has its roots in frustrations in Europe that led so many to abandon their lives in the Old Country and attempt to find their futures, if not their fortunes, in America.

Those frustrations were multiple, but in most cases they revolved around the absence of dignity for some group designated to be despised by others.

No, it is not the universal condition. It is a specific condition of certain societies. And it was transferred wholesale to what would become the United States.

I was watching some of Niall Ferguson's "economic" essays on PBS while I was here, and couple of things struck me: 1)he explained the Pinochet coup and brutal rule in Chile as a struggle against Communism which therefore justified the military extinguishing the elected Allende governmnet and the Chilean democracy as well as the execution of thousands and the torture and imprisonment of tens of thousands more suspected Communists. In his view democracy and social justice and (especially) the Welfare State are worthless extravagances that can be -- nay, should be -- sacrificed in the interests of... predation. He was almost jolly about the suffering of others.

2) he pointed out that the "conservative" economic principles which rule the world today (actually, they are radical not conservative at all) are developments of "canny Scots" who in the 17th and 18th centuries came up with -- radical -- new principles of economics and economic success: mindless predation of the strong on the weak, imperialism, extraction.

So here we are.

It is a mindless system of exploitation and destruction for nearly everyone. It characterized the thinking of parts of the ambitious members of the bourgeoisie for two centuries, and now it is being made the sole ideological principle of corporation and state.

Sooner or later -- generally sooner -- it leads to catastrophic failure and Revolution.

The principle failure is the failure of Dignity. Without Dignity, the People rebel.

The mindlessness of a system that sees value only in terms of dollars and display, that asserts a right -- nay a duty -- to extract and exploit and steal at will from any and all comers (don't think the high and the mighty are exempt; stealing from one another is an art form among the practitioners of this system) leads inevitably to its deterioration and decline and finally to its isolation and destruction.

The concept of Justice itself is an alien imposition on the economic predators who have so blithely taken control of the United States and the world for the purpose of endless exploitation of people and resources for profit.

Justice is a factor of nobility, and these exploiters, though sometimes styling themselves "nobles" have no nobility. They despise "justice" in any form that may affect their extractive demands or mitigate the destruction they cause. The situation for years now has been one of unbridled economic terrorism against whole peoples and governments by a handful of out of control monetary vampires.

"Justice" in their view is using the coercive power of the state to enforce ever greater levels of extraction and exploitation and most certainly using it to crush the occasional unrest of the masses.

We saw that in India during the British Raj. But that's how imperial societies work: extraction and exploitation on a magnificent scale (to what ultimate object is always something of a mystery; typically, it's just because the exploiter can and wants to do it); rigid and typically brutal suppression of the masses, generally with the active connivance of their ostensible protectors...

Ultimately, of course, this system of "justice" cannot be maintained, for it is based on lack of dignity for any but the select and a fierce competition between them for what has been stolen from everyone else.

The basic injustice and indignity of the system itself leads to its eventual disintegration. It cannot be maintained except through ever greater applications of force. And that is not a sustainable course. There are always too many to be kept down by the handful that constitutes the Power Elite; there are never enough mercenaries to do the job.

Absence of Justice destroys Community, and the destruction of Community causes despair leading to the denial of Peace.

Peoples have long since figured out how to live -- and flourish -- in societies based on Dignity, Justice, Community and Peace; it's demonstrated every day in many social contexts including certain religious contexts. Yet here we have the ongoing spectacle of a handful of financial actors seeking to thwart the best instincts and interests of humanity in order to strip as many as possible of all their social and economic assets.

Why? Because apparently they believe there is nothing standing in their way -- and they want to.

There is no sense in continuing this course, but our governments appear to be incapable of listening to the chorus of voices from the People, incapable of doing the right thing, incapable of acting on behalf of the People they ostensibly represent. And this is nearly a universal situation; governments almost everywhere have become the exclusive playthings of the very highest of the mighty for whom the interest of the People is at best an abstraction when it's not a distraction from the important work of exploitation and destruction.

The People will nevertheless prevail. The Empire of Greed will collapse. It's inevitable. The People will continue to demonstrate alternatives to the continuing destruction engaged in by governments and their owners and sponsors. Those demonstrations -- essentially of another way to live -- have a cumulative effect, and it may be a slow march from this point forward. But the effect is very real.

Merry Christmas. Happy New Year. The Beginning is Nigh. 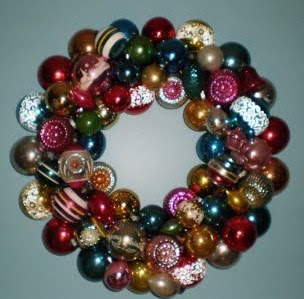 [Posted from a motel in Kingman, AZ on my way back to California for belated Christmas....]
Posted by Ché Pasa at 4:08 AM