What Are They So Afraid Of?

[Note: I'm at our place in New Mexico; we just had a doozy of a snow storm that shut down the Interstate all the way to the Texas border. The weather has been beautiful today, and I've spent most of it clearing the driveway of snow so I can get to the street, the street that was just plowed a little while ago, so we could very carefully drive along its still very slick surface to see the sights. It is a Winter Wonder Land out there!]

The Denver Action to "clear" Occupy Denver and their associated tents from the square last night caught my eye. I kept thinking, "What are they so afraid of?" -- meaning the cops. It's not so much that they doll themselves up like RoboCops. We're used to that by now. It's not even the fact that they always seem to arrive and act in formations following a strange little script of how to proceed against the Rabble. It's that they do it at all. Any of it.

It's not just Denver. They do it everywhere, all around the world. What are they so afraid of? And why to they do it at all?

I saw this picture at the Denver Post site, and thought, "Look how scary. He's posing like Tebow. In the street. How frightening..." 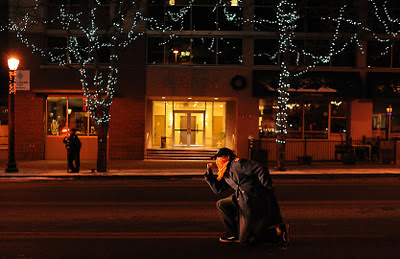 What are they so afraid of?


Hundreds of costumed and armed Denver police once again assembled -- this time under the watchful gaze of the new Denver police chief -- to evict a few dozen Occupy Denver demonstrators. A camera man had come to video the action and was guided away from the park by the police.

Flames rose when the demonstrators chose to burn some of their encampment equipment. But there was no violence from the demonstrators. As usual, the violence was perpetrated by the police against... their perception of defiance.

Defiance requires hundreds of police in riot costume in city after city to suppress -- or to appear to suppress -- while high level crime is... ignored. No, staying in a park after curfew requires an entire army of police. Anything else of a criminal nature, not so much.

Even a full scale sports riot doesn't usually call for this level of suppression.

The only comparable suppressive activity that I know of is the extraordinary level of police overreaction at every G8, G20, WTO, IMF, and political convention held since 1999.

Occupying parks and other public squares is being treated as if it were a National Special Security Event.

The Rulers are so frightened of defiance, they will go to any length to suppress it.

And apparently they will pay any price.