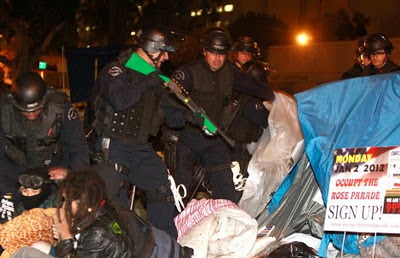 More of the Different Universes Phenomenon:

* One seriously injured protester, who had been shot with a shotgun beanbag round and had an oozing bloody welt the size of a grapefruit just above his elbow, was denied medical attention for five hours. Another young guy, who complained that he thought his arm had been broken, was not given medical attention for at least as long. Instead, he spent the entire pre-booking procedure handcuffed to a wall, completely spaced out and staring blankly into space like he was in shock.

* An Occupy LA demonstrator in his 50s who was in my cell block in the Los Angeles Metropolitan Detention Center told us all about when a police officer forced him to take a shit with his hands handcuffed behind his back, which made pulling down his pants and sitting down on the toilet extremely difficult and awkward. And he had to do this in sight of female police officers, all of which made him feel extremely ashamed, to say the least.

The Tsar's Cossack dressed for battle in Los Angeles: 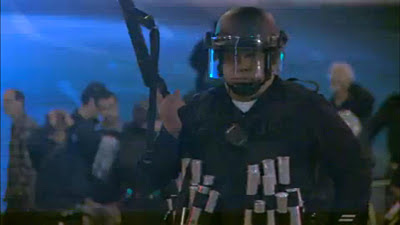 I love all the apologists for this police state who keep insisting that because it is not yet as bad as somewhere else, it's not that bad yet. So just shut up.
Posted by Ché Pasa at 3:16 PM